We’ve all seen them, the white, fluffy, loose-fill material used to protect products. Maybe you played with them as a kid. Maybe you pulled out nicely wrapped Christmas presents from out of town family hidden between them. We’re talking about packing peanuts, and we’re talking about the great alternative to them; inflatable packaging. Air pillows that are wrapped around products or used to fill the void inside boxes. They’re more efficient, cost-friendly, and put a more positive spin on your company’s image. And through this real-life scenario, we’ll show you 5 reasons inflatable packaging is better than packing peanuts. 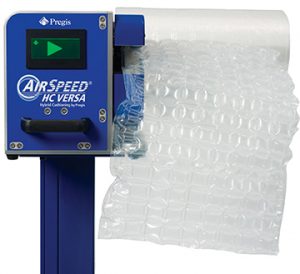 A major US retailer, fragile products, product damage, and long pack times. The retailer was experiencing damage issues with their fragile products when they went out for shipment. We’re talking expensive glass, china, and very fragile houseware items. Their problem with damage was starting to add up and the customer complaints were rolling in. Before making the switch to inflatable packaging pillows, they were using loose-fill packing peanuts. The bottom of the box was filled with about 2 inches of peanuts, the products were placed on top. Once the boxes were ready to be taped shut, even more packing peanuts were thrown in. This was leading to a slower pack time and an unwanted rate of damage that was unacceptable to the retailer.

Damage Reduction – The AirSpeed HC inflatable system was recommended by us as a solution to their packaging problems. First, after performing drop and pack out tests, we found that they could reduce damage by up to 15%. Just by moving away from packing peanuts, they improved their shipping damage rate. Pack time was also improved by up to 30 seconds shorter than before. Using the right type of protective packaging material helped the company achieve their main goals almost instantly. 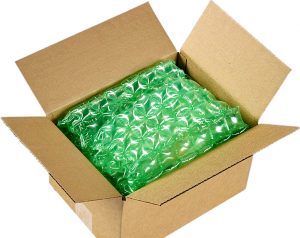 Labor Cost Reduction – Switching from packing peanuts to inflatable packaging helped improve the operations of the company in trickle down effects. Man hours went down significantly after transitioning to using the AirSpeed HC system in all of their distribution centers. Eliminating 702 deliveries and decreasing labor time by 1790 hours each year made their packaging operations much more efficient.

Going Green – The major trend in the packaging industry right now is environmental sustainability. And added bonus to the retailer of the inflatable packaging was their ability to reduce their carbon footprint. The reduction in source materials, reduced waste in landfills. Their freight costs were cut by almost 75%, saving energy and reducing their carbon footprint. Probably the most substantial effect of the switch is that the inflatable materials are all 100% recyclable film. The film can be broken down and used again and again, unlike other forms of protective packaging. 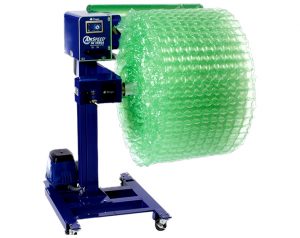 Improving the company’s image – Customer complaints went down right after the switch. A reduction in damage improved their customers’ image of them. The fact that they took care of their products, means they took care of their customers as well. A little care goes a long way. They also received positive reviews on their new aesthetically pleasing packaging. Customers saw their products are soon as they opened the box. No more looking through those packing peanuts just to find what you ordered. The HC inflatable film shows a much cleaner package, that actually protects the products.

Total lower costs – With the savings the company received on material, labor, and damage reduction, the decision to move to inflatables as a company took effect. Each distribution center was fit with several machines, enough to replace their old operations completely. Seeing the improvements take fold, the entire company now benefited with lower costs and improved efficiency.